The engine order telegraph aboard the dredge McFarland. 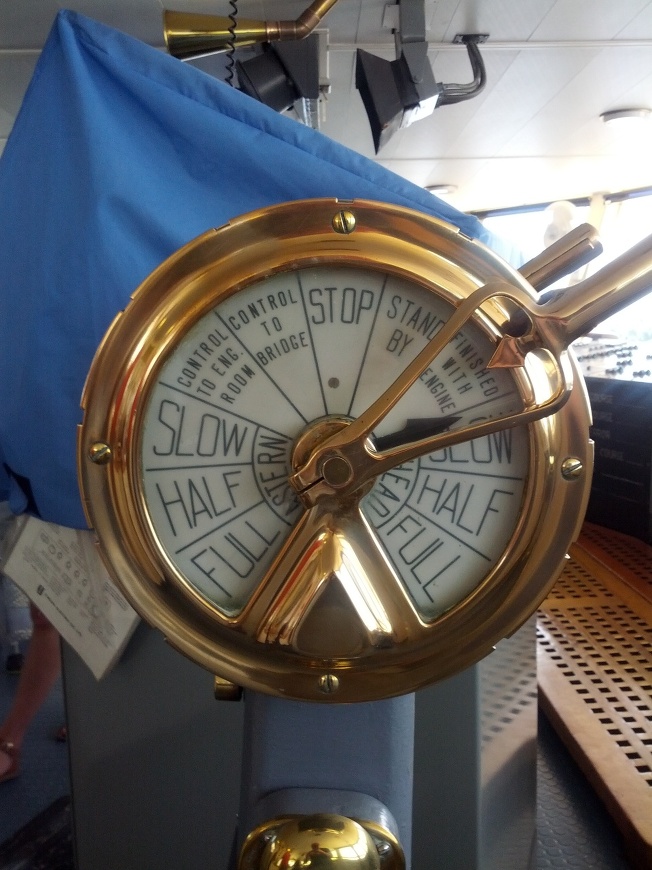 This is an informative and…I guess “prideful” souvenir booklet published and distributed by American Airlines in 1959. My girlfriend’s father kept it from an American Airlines flight he took from Philly to Boston.

It was the dawn of the Jet Age and American Airlines had just become the first US domestic carrier to fly its own jets. The first pages get right down to explaining how jet engines work and are followed by much explaining about exactly how great life is going to be from now on.

An excerpt of their explanation of airfoils:

Secret of the Swift New Jets:

HERE’S WHAT MAKES THEM FLY

Giving You - and Your Plane - a Lift

If air travel is new to you, you’re probably not familiar with the shape called an “airfoil”. This is a basic part of the design of all aircraft – the cross-section of your plane’s most important parts – wings, vertical and horizontal tail surfaces.

The airfoil shape is a thin teardrop. In the wing, it is flattened on the underside and tops up at a slight angle, causing pressure in that area as the wing moves through the air. Because the top of the airfoil is curved more than the bottom, the air that passes over the top of the wing has further to go than that which goes underneath. So it has to move faster in relation to the wing – and by the laws of physics a decrease in pressure on the top surface of the wing results. The difference in air pressure between this air and the air below the wing creates the lift that keeps your plane aloft.

On 707 Jet Flagships, you’ll see this airfoil used in a wing that’s gracefully “swept back”. This enables it to slice the air with less resistance…and to absorb and irreguljarities in the air stream more flexibly.

Now, not to sound like an ignorant fool, glorifying an era I didn’t experience and can’t understand - but the first pages of this booklet get right down to the basics of how flight works, not …you know…how to have an entitled attitude and a vicious frown about diet sodas. And I think that’s alright to interject here.

Only eleven pages in and we’re already/finally/justly at a simplified diagram of a jet engine:

What Makes a Jet Jet?

Planes you have come to speak of as “jets” are known in the industry as turbine-powered aircraft – because their engines use smoothly-spinning turbines rather than pistons and cylinders.

The jet engine is a scientifically shaped “stovepipe” – open at both ends, allowing air to pass through. The turbo-jet engine swallows several tons of air a minute through the intake (1).

(2) The compressor, or “fan” compresses the air, cramming it into the metal chambers where fuel is added and burned (3).

The hot, expanding gasses created here “jet” out through the tailpipe (4) under greatly increased pressure and speed.

On the way, these gases spin another set of “fans”, the turbine (5), which in turn operates the compressor up forward through the connecting shaft (6) – completing the cycle.

An impressive new achievement of Lockheed design and construction, the Jet-Powered Electra Flagship makes a perfect partner for the 707.

The Electra measures a full 104 feet long, has a wing-spread of 99 feet and is 32 feet high at the tail. Powered by four Allison turboprop engines, it can travel 2500 miles nonstop – with generous reserve fuel allowance. The Electra Flagship is at home on any route – short, medium, or long. Its speed of over 400 miles per hour puts it well ahead of all other aircraft in its class.

The Electra Flagship is powered by turboprop engines. Turboprop engines – sometimes called “propjets” – actually are jet engines and very similar to turbojets in operation. Air enters through the intake (1), is compressed (2) and passes into the “cans” (3). Fuel is added and burned, creating hot, expanding gases which it jets out through the tailpipe (4) with greatly increased velocity. Just as in the turboject, these expanding gases spin turbine wheels (5) to operate the compressor and (here’s the difference) the attached propellor.

Only 170 of these Electras were ever built, with American Airlines placing an order in 1955 for 35 aircraft. Two deadly passenger airline crashes attributed to the occurrence of a “whirl mode” happened in a span of six months between 1959 and 1960, but the FAA declined to ground the airplane. From Holden, Henry M., “Mysterious Electra Crashes”, World Airnews, a description of whirl-mode:

Whirl mode was not new, nor was it a mysterious phenomenon. It’s a form of vibration inherent in rotating machinery such as oil drills, table fans and automobile drive shafts. The theory was devastatingly simple. A propeller has gyroscopic tendencies. The engine turbines spin at 13,820 rpm and the propellers at 1280 rpm. These forces are designed to stay in a smooth plane of rotation unless displaced by a strong external force, just as a spinning top can be made to wobble if a finger is placed against it. Now suppose a force drives the propeller upward. The stiffness that’s part of the nacelle structure promptly resists the force in a downward motion. The propeller continues to move in one direction, but the rapidly developing whirl mode is vibrating in the opposite direction. The moment such a force is applied to an engine, it starts a chain reaction. The propeller’s normal plane of rotation is disturbed, sending inharmonious forces back to the wing. The result, if not checked, is a wobbling effect that begins to transmit its motion to a natural outlet: the wing. The wing now begins to flex and flutter, sending discordant forces back to the engine-prop package, which in turn creates more and violent vibrations, feeding the mode new energy.

Investigators of the first crash (Braniff flight 542) found fragments of the left wing significantly far away from the rest of the aircraft, and witnesses to the second crash (Northwest flight 710) said the entire right wing was missing and only a part of the left wing remained when this second aircraft crashed. This nasty feedback loop was ripping the wings off midflight.

The issue with the Electra was found to be insufficient stiffness in the Lord Company manufactured engine mounts used on the outboard engines. To address this Lockheed established LEAP - the Lockheed Electra Action Program, which in addition to addressing the engine mounts also stiffened the wing structure at a cost of $25 million ($196 million in 2013 dollars).

No orders were placed for Electras after this retrofit program and no additional crashes attributed to this whirling mode occurred.

“American’s Long-Famed Flagships - the DC-7, DC-6, and the Convair”

The DC-7 came to be by way of an American Airlines requirement for an aircraft that could fly the distance of the continental US in 8 hours. It was produced from 1953 to 1958 and approximately 40 remain in service. American Airlines DC-7 promotional video

The descriptions of these three aircraft are written in a markedly less enthusiastic tone and fill only two pages, with phrases like:

You may be familiar with what it’s like to ride in a DC-6, DC-7, or Convair Flagship. Piston engines come to life with a puff of smoke. 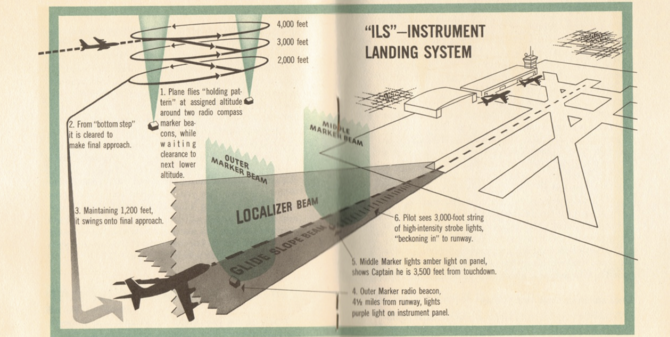 Like most pieces of written ephemera there are pretty hilarious collections of words:

Babies love Flagship travel. They find flight so soothing, they’re usually lulled to sleep in no time at all.

We’ll be more than happy to help with you infant’s bottle. Naturally, we can’t provide the special formula prescribed by your pediatrician, but we can provide a convenient container for carrying your own bottles aboard. Just ask for this service when making your reservation, and there’ll be a “baby bottle cooler” waiting for you with the Ticket Agent. Once you’re on the plane, your Stewardess will gladly warm the formula for you. Better give her ample notice though…just so she’ll have it ready exactly when you want it.

You’re welcome to use our limited stock of prepared baby foods, but we’d appreciate your not asking the Stewardess to feed your infant. Much as she’d love to do so, other duties throughout the cabin demand her time. The same holds true for changing your baby. Should the infant’s needs exceed your expectations, your Stewardess has a special supply of disposable diapers…but please don’t ask her to make the actual change.

It looks like this era was probably a lot like the present in that people asking other people to do outrageous shit for them was enough of a problem to necessitate mentioning it politely.

In the rear flap there are postcards featuring the 707 and the Electra. 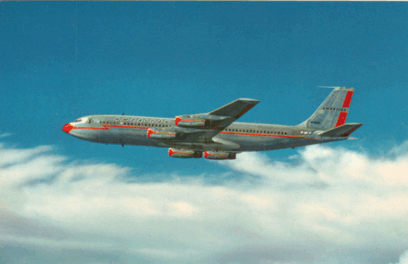 The 707 jet flagship brings revolutionary jet speed and remarkably improved comfort to air travelers. Truly, getting there has become a real pleasure. 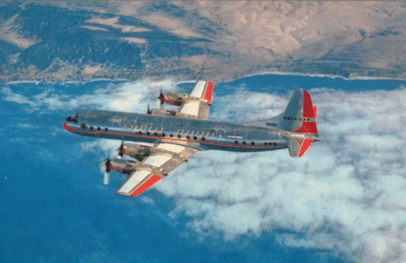 The jet-powered Electra flagships are the newest, fastest and most spacious jet-prop airliners.

As a license plate fan/collector, this is an awesome one. In Delaware you can sell low digit tags on the open market for a lot of money. If you have one of these plates, you can get it as a black plate for $100 or so.

So seeing this plate on this car really got me going - this is a Buick Estate Wagon, probably early 1980s model. One might be able to sell this car for $500, but get maybe tens of thousands for the plate. And it’s the plain yellow-on-blue tag! This person is awesome.

I set out to fix this shitty paper shredder, but when I took it apart, there was a metal gear meshing with a plastic gear, which was stripped.

After removing the high torque electric motor and stashing it away, I was just going to chuck the rest, but saw there was a 10mm nut directly around the shaft for the shredding teeth.

Since this is the Internet, here’s a video of using a drill as the motor for the shredder, and shredding whole envelopes at a pretty hilarious speed.

If you didn’t already want to punch Lynne Abraham in the throat from her time as Philly an ineffective DA, there’s this fucking gem, quoted from this, an article about Philly DA Seth Williams treating arrests for possession of a little more than an ounce of marijuana as a summary offense as opposed to a misdemeanor: 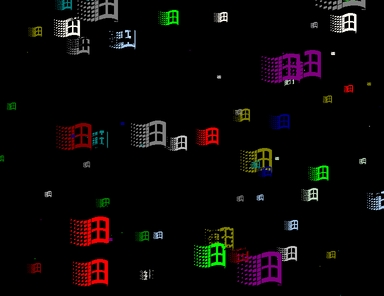 This is a replication of the classic ‘Flying Windows’ screen saver that first appeared in Windows 3.1. In order to use it, you must have at least OS X 10.4.

Just put it in ~/Library/Screen Savers.